Services | Jesus Calls for Repentance Regardless of Events

FBCWest 393 | Jesus Calls for Repentance Regardless of Events 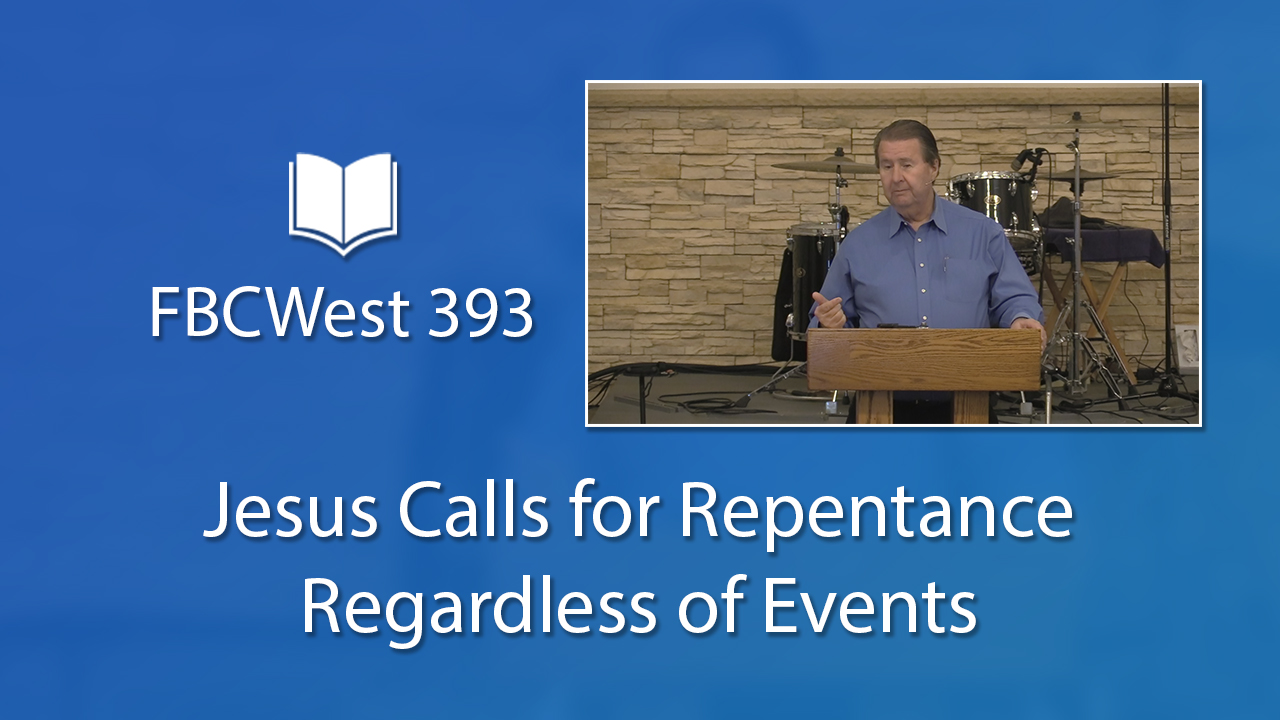 “God is Spirit, and those who worship Him
must worship Him in Spirit and truth.”

Now all sometimes people think will fruit means well. I guess I wind somebody else in the Lord.

Yes, that's part of it. But the fruit that is usually that we are to inspect.

Is the fruit of the spirit.

Peace, love, gentleness, kindness. All of those things that are apart.

And again, the you is not time to inspect your fruit, I am to look at my life an
d inspect my fruit or lack thereof.

Praise the Lord or those who bear fruit.

Verse 10 he goes on an he was teaching in one of the synagogues on the Sabbath n
ow.

Jesus regular routine is to go to Sabbath and because he was.

Itinerant Rabbi. He would frequently be the invited speaker.

But Jesus is regular routine was to attend the synagogue at the Sabbath and at t
he temple on the holy days.

His disciples aren't quite as good.

Attending not necessarily the synagogue, but church regularly.

Now the two things is one I want you to see that Jesus is habit is to attend.

To me, the sad thing is 'cause something's going to happen here.

What if you didn't go?

And so I encourage us as his disciples, to continue the habit if you will, to attend worship.

To attend teaching so that you not only learn from him, but you don't miss what
he's doing.

And so he was teaching, in which the synagogue on the Sabbath, and there was a woman who was 18 years.

It had a sickness caused by his spirit and she was bent double and could not straighten up at all.

We see this woman.

This is for 18 years. Can you imagine? For 18 years being sold doubled up that you can't even look straight? She's doubled up.

And it says part of this illness is by a spirit.

And when Jesus saw her.

And again, what if she didn't attend synagogue that day? 'cause After all's she
probably didn't feel well.

But she attended Sabbath anyway, and when Jesus saw her, he called her over. Now
again he called her. Jesus didn't go to her. She said, come here, so she went.

When Jesus all hurry called her over and said to her woman.

You are freed from your sickness.

And he laid his hands on her, and immediately she was made erect again, and began glorifying God.

Two things Can you imagine?

How revival honor broken out in that synagogue? Here's this woman who's been in
this situation for 18 years is not such a short time that no one would notice. I
mean, pretty much her life was this 18 years of this experience.

And Jesus heals her immediately. Cheap gets up a wreck. And not only that, she s
tarts glorifying God, which ought to be our response. When God does what he does
.

But the synagogue official became indignant because Jesus healed on the Sabbath.


And began saying to the crowd in response, there are six days in which work should be done. So come during them and get healed.

But not on the Sabbath Day.

Let's look at the logic of this.

People go to synagogue on the Sabbath, then I'll go there every other day.

So why would you go on Monday to get healed when there ain't nobody there?

Is he's going somewhere else?

Other than laying hands on the lady in speaking.

What work got happened?

His power is such he didn't need to do much.

So to school that work seems.

To be a stretch of the imagination.

But I tell you, I'm pretty sure that whether it was work or not, this woman was
excited and grateful that healed are.

Can you imagine the hard hardness of watching somebody in pain and difficulty or
18 years?

And instead of glorifying God being upset.

The more they seem to stay the same.

Now notice Jesus doesn't apologize is obez you're right I shouldn't have done this on this Sabbath. Oh he's gonna hit them right square between the eyes. But the Lord answered him and said, you hypocrites.

So when did that not become work?

'cause you got untied something now. If in modern days where you can't push a button on an elevator and not that can considered work. Untying the talks would be work to lead that ox or donkey towards water would be work and yet gotta sing.

Why is it that that's exempt?

Because it follows the Scriptures.

How do the scriptures read?

To love the Lord Your God with all your heart, all your mind, all your soul, all your string until love your neighbor as yourself.

The Scriptures will also say how is it that you can love God, who you cannot see. You do not love your brother who you can. Jesus was loving his sister which made him Love God.

And I think even more so, not just genetically, but as the Scriptures who says everybody who's a faith is of Abraham seed. I think Jesus is acknowledging this woman is a believer.

She is a daughter of Abraham.

As she is whom Satan has bound for 18 long years.

The only times 18 is short.

Is when you look back.

I'll look back and say, Well, that was like 4 lifetimes ago.

Didn't seem as long ago as it was when I was going through it.

Should she not have been released from this bond on the Sabbath? Jesus ain't what better day?

And as he said this.

All his opponents were being humiliated and well they should.

Find a few times we see them actually kind of Boeing. There going loops, usually
there so headstrong in their opposition they don't care what Jesus says or does
.

At least here they understand the humiliation.

And the entire crowd was rejoicing over all the glorious things being done by hi
m.

So we got you synagogue officials. Some of the quote Unquote religious leaders who are upset but are now kind of. I hope this service over is over quickly.

But the crowd is saying, praise, the Lord, we have seen God at work in our midst
.

Some people hearing Maine may be bound by some sickness.

But all of us.

Or Heaven bound by sent.

We are dead in our sins in our trust passes, we seem to be slaves to that.

And God is willing to loose you.

And it's no longer work to him because as he said on the cross, it is finished.

All the work is done. All we need to do is approach him in faith.

Saying, I know and agree with the Scriptures.

And the wages of sin are death, that there is no one good. And quite frankly, I
never thought for God. The God always sought for me.

And that it is his desire.

To lose me on the bounds of sin.

And what better day.

Weather be a Sabbath or a Sunday or a Monday, but now.

To come to that freedom.

And for those of us.

They have cheap and your grace.

That I have not been the disciple I ought to be, but by your grace I will change
that direction.

By your love, you still call me.

That the lives of others.

I will simply inspect.

My relationship with you.

Which self really is offered to us?

And all God's people said.